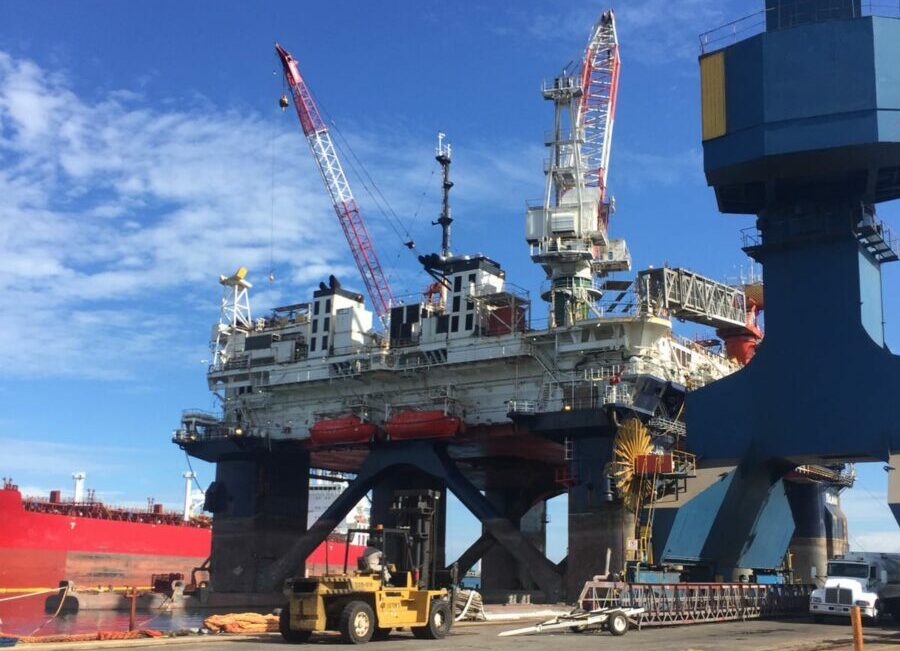 A team of Hydrex divers traveled to Veracruz, Mexico for a stern tube seal repair. The operation consisted of the underwater replacement of the damaged seals on both assemblies of a semi-submersible offshore platform.

The unit left the field after its project was finished and was berthed alongside to have repair and maintenance work carried out without docking. We were asked to perform the stern tube seal repairs during the available window of opportunity.

This kind of underwater repair is possible thanks to our in-house developed flexible mobdock technique. We have been using this technology successfully for well over a decade and our teams have carried out many underwater shaft seal replacements in that period.

The customer first contacted us in the beginning of the year to have the repair carried out before the summer. After a change in the platform’s schedule we were asked to move the operation to August. We have always put our customers’ needs first so we swiftly complied to the request.

When the unit arrived in Veracruz, our team mobilized together with all the required equipment. In this particular case the operation could be planned well in advance. Our lightweight flexible mobdocks are designed to be transported fast and easy to any location around the world. It allows us to respond very swiftly when an emergency repair is needed.

After the diving team removed the rope guard of the portside stern tube seal assembly, they performed a thorough underwater inspection of the assembly. Next they installed the flexible mobdock. They then removed the four damaged aft seals one by one and replaced them with new ones. The two forward seals were also replaced during the repair.

All parts of the assembly were then reinstalled and secured. Leakage tests were carried out with positive results, after which the divers removed the flexible mobdock. This part of the operation ended with the reinstallation of the rope guard.

All six seals of the starboard side assembly were then given the same treatment. At the request of the customer part of our diver/technician team remained on standby for a short time to make sure everything was in order. When this was the case, they left the platform together with the rest of our equipment. This concluded the repair. A to Z package

Damaged stern tube seals will often cause an increasing amount of oil leaking or water ingress as the damage worsens. By replacing the seals when the damage is first discovered Hydrex keeps the down time low. Oil leakages can also produce a potential or actual liability when for instance going to the United States or other sensitive areas. When they have a leaking stern tube, ships are often not allowed to enter ports, or they can receive heavy fines.

By using a flexible habitat our divers create a drydocklike environment underwater around a seal assembly. This enables our teams to perform seals replacements or other work on the housing. These repairs or replacements can be performed on a large variety of seal applications.

It is not always totally straightforward to replace seals as there can be quite a bit of variation in the configurations of the stern tube itself. There can also be complications with the liners, which can be worn down and show ruts. All this is routinely handled by our team on the job. We usually supply the equipment and the owner is free to supply his own seals. We can handle all type of seals from all original manufacturers.

If you have any questions regarding a possible propeller repair, do not hesitate to contact us.

We are at your disposal 24/7 and ready to mobilize almost immediately.