Home - Emergency scrubber overboard repair in the Netherlands and Denmark

Emergency scrubber overboard repair in the Netherlands and Denmark 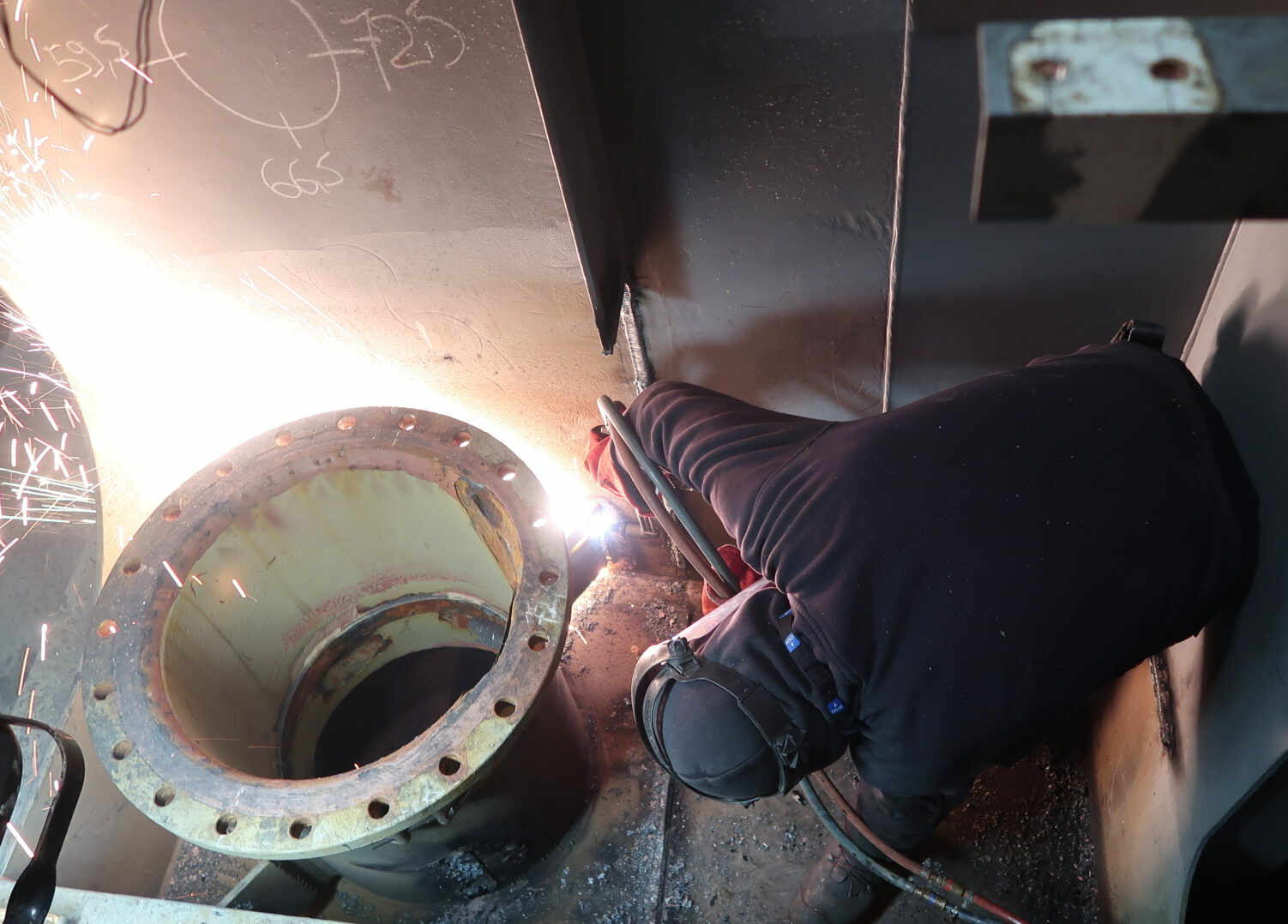 Emergency scrubber overboard repair in the Netherlands and Denmark

Our teams of diver/technicians carried out pipe replacements on two sister vessels. These shuttle tankers were berthed in Rotterdam and Skagen respectively and experienced water ingress as a result of corroded scrubber cooling pipes.

Exhaust scrubbers are systems that filter out all harmful toxins from exhaust gasses of marine diesel engines. These hazardous pollutants can severely corrode the pipes of the scrubber.

The two vessels were on standby to transport oil from offshore oil fields whenever required. Going to drydock was therefore not an option and we were contacted to offer an afloat solution.

A small team traveled to the location of the first vessel with one of our workboats to perform an inspection of the damaged pipe on both the waterside and the onboard side of the hull. This revealed that the scrubber outlet was corroded, causing the leak. Replacing the affected part of the pipe in its entirety was the only option.

With the measurements of the inspection a detailed scope of work was devised and suggested to the customer. Because we could offer a start-to-finish afloat solution he gladly accepted the proposal. This meant that we would take care of the planning of the operation as well as the adjustment of the new pipe and its installation. As a result he was released of all the hassle surrounding the repair. He knew that we would take care of everything within the available time frame and this to our renowned high quality standards

Removal, construction and installation by one team
A tailor-made mobdock was constructed at our fast response center with the measurements taken during the preliminary inspection. The team installed this mobdock over the outlet of the pipe of the 270-meter tanker berthed in Rotterdam. This allowed them to perform work inside the engine room without further water ingress.

Because there was very little space the work in, several of the frames around the pipe were first removed. Next the team cut away the corroded part of the old pipe. While the shell plating was prepared for the installation of the replacement pipe, a new diffuser and flange were constructed. This was done on-site by our diver/technicians.

The pipe was then positioned and secured with a full penetration weld. The new flange was also installed. Next and independent inspector carried out NDT testing of the welding work.

To prevent the new pipe from corroding, the inside was coated with Ecospeed. This product is produced by Hydrex sister company Subsea Industries (www.subind.net). Ecospeed is highly chemically resistant. Taking into account the nature of the process taking place inside a scrubber, this is essential for a lasting protection of the pipe.

The team then installed the new diffuser and repositioned the frames around the pipe.

Initially the customer only wanted us to perform the replacement on one ship, but satisfied with the first operation he asked us to carry out the same on the 276-meter sister vessel. This second shuttle tanker was berthed in Skagen, Denmark.

Conclusion
Our divers are certified wet and dry welders as well as technicians. This allowed us to offer the full repair from start to finish, including creating the new diffuser. By doing everything ourselves and on-site we made sure that the tankers could remain on standby to mobilize when needed.