Underwater repairs in the U.A.E. on 150-meter large grounding damage 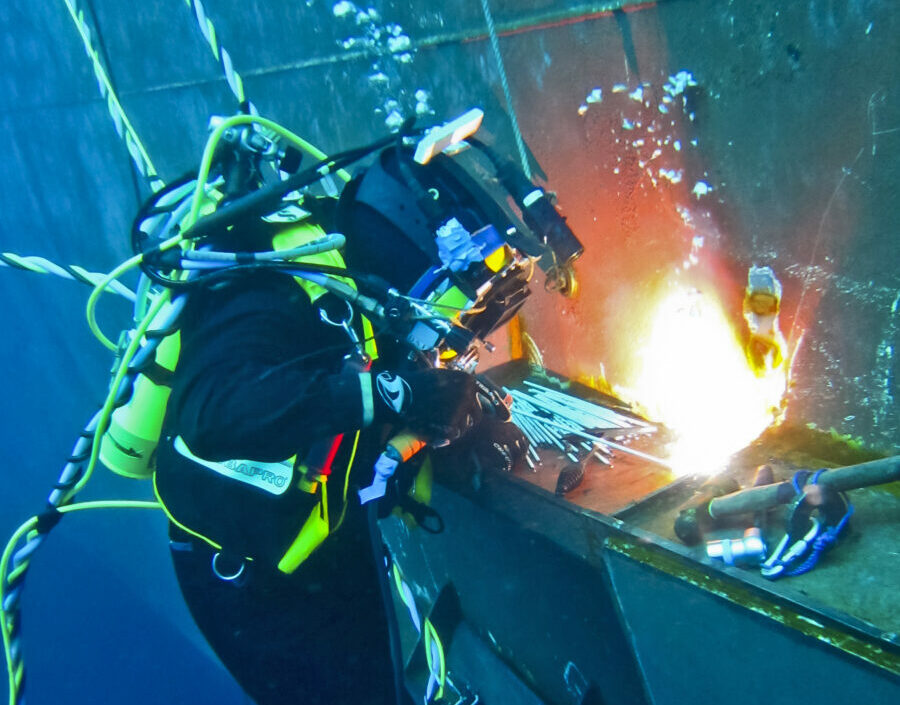 Underwater repairs in the U.A.E. on 150-meter large grounding damage

When the shell plating of a 300-meter bulker was indented over a length of 150 meters after a grounding in the Suez Canal, a large crack 1.5 meters long appeared, making it impossible for the vessel to sail any further. To close off the crack and allow the vessel to continue its route, Hydrex sent a nine man diver/technician team to the vessel’s location, 21 miles off the coast of Fujairah, United Arabian Emirates.

The ship had suffered very extensive grounding damage while leaving the Suez Canal, indenting the underwater hull on the starboard side over half the total length of the ship and up to six meters deep, compressing the shell plating and seriously weakening the strength of the hull. Luckily the damage only covered the first three ballast tanks, for had it reached the fourth tank or the cargo hold, there was risk that the ship would have sunk.

As the situation now stood, only some small cracks were present and no leakages. The ship was allowed to sail on to its next stop in Fujairah were unfortunately a large crack appeared. This was a consequence of the movement of the indented plating during the journey. The additional damage and consequent water ingress made it impossible for the vessel to continue to China for unloading until the crack was repaired sufficiently to avert the risk of any further damage.

After the customer contacted us, one of our technicians flew to Fujairah for a preliminary inspection of the damage. This was essential in order to create a repair plan that would offer the customer the best possible solution for this specific problem. This plan was designed in cooperation with a naval architect. Next it was proposed to the customer who gladly approved it.

The leakage had lowered the fully loaded ship from a draft of 18 meters to 22 meters. Because such a water depth means shorter diving intervals, a large diving team was immediately mobilized to the vessel to allow the team to work continuously for the 12 hours that were available each day.

To get a perfect assessment of the way the shell plating had been compressed, a special frame was made and secured over the damaged area. This allowed the diver/technician team to get exact measurements of the distorted plating. These measurements were then used to create a special cofferdam that would cover the crack and prevent it from growing further.

After the cofferdam had been positioned and secured, it was reinforced with longitudinal stiffeners and additional fortifications until it was strong enough to hold the water pressure. The tank behind the crack was then emptied, bringing the vessel back to its previous draft of 18 meters.

In total the reinforcements covered an area of 18m² and the combined length of all the welds was over 500 m. When the operation was finished, only a few reinforcements needed to be added to the inside of the hull to prepare the ship for its journey to China.