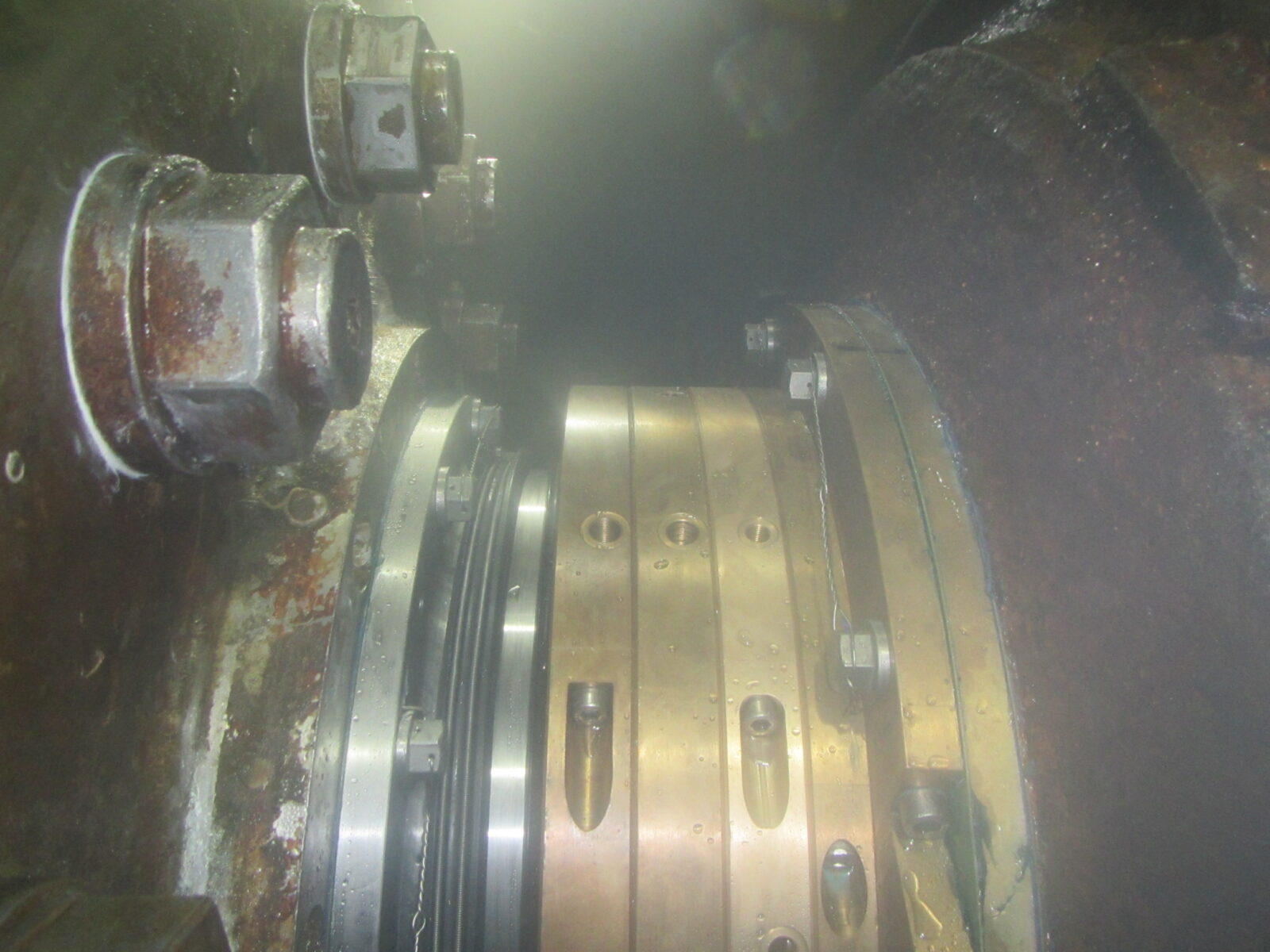 We have developed a flexible mobdock repair method that enables  the underwater replacement of all types and sizes of shaft seals. This technology has been successfully used  by our diver/technicians for over a decade. It allows ship owners to keep their vessel sailing, saving precious time and money.

In 1998 our divers completed a seal repair training course led by John Crane Marine, who also worked together with Hydrex in the testing of new developments. At the end of 1999 we successfully started working with face type seals in Havant, near Portsmouth in England on what we considered to be the last barrier in replacing stern tube seals. It was a new and novel approach that was based on the strength of the mobdock (short for mobile mini drydock) applications that we had developed in the 70s, 80s and 90s.

Those early repairs were carried out on face type seals, that do not necessarily need a dry chamber or a dry habitat to work in. Soon it became apparent that we needed to find a solution for the lip type seals.

The next step was taken when we discovered it could be done with an inflatable habitat. This new flexible mobdock enabled us to do underwater stern tube seal replacements in the dry.

The first application for that particular type of operation was done on a cruise vessel. We replaced a 632mm diameter seal. This first success was a real breakthrough. After that it quickly became obvious that we could replace all types of seals. We performed ten more seals in the first year, for various manufacturers. These jobs went well: on each occasion the execution was done within the time frame that we had estimated.

It is not always straightforward to replace seals, because there can be quite a bit of variation in the configurations of the stern tube itself. There can also be complications with the liners, which can be worn down and show ruts. All this is routinely handled by our teams on the jobs.

In this article you can find a short summary of some of the recent stern tube seal repairs our teams have carried out. Like all shaft seal repairs we offer, these were performed in cooperation with the OEM. This allows us to provide our customer with original spare parts which guarantees the best quality material. We usually supply the equipment but the owner is free to supply his own OEM seals. We can handle all type of seals from all manufacturers.

Oil was leaking from the stern tube seal assembly of a 157-meter dredger. A team of Hydrex diver/technicians therefore mobilized to the vessel’s location in Uruguay, together with all the needed equipment.

The entire housing of the assembly was severely corroded and needed to be replaced. Because the housing consisted of split shells, this could easily be done by our team. The existing running area was also worn out. The divers therefore installed a spacer ring to create a new running area. Thanks to a newly developed method, this could also be done inside the flexible mobdock.

There was almost no inwater visibility at Montevideo at the time of the repair. Our teams are trained to be flexible and adapt to constantly changing working conditions. This made it  possible for them to perform the repairs under the strictest safety regulations, to the highest quality standards and without any unnecessary delay.

When a steel wire got stuck in the stern tube seals of a 156-meter vessel, it experienced a severe oil leak.  The ship needed to pass through the Panama Canal to reach its next destination, but the leak had to be repaired before it was allowed to do so. We flew in a diving team immediately to carry out a fast underwater repair that would help the vessel continue its schedule.

A thorough underwater inspection revealed that the damage to the stern tube seal assembly was extensive. The rope guard was severely dented and the seal housing had been destroyed. Similar to the repair in Uruguay, both needed to be completely replaced. Because this stern tube seal assembly also consisted of a split type housing and liner, our team could carry out the entire replacement afloat.

A 134-meter chemical tanker suffered a leak to its stern tube seal assembly while berthed in Antwerp. The Port Authority demanded that an underwater inspection was carried out and an on-site solution was found. We were contacted to perform the inspection and follow up repair in the absolute minimum amount of time.

As a result of our many years of relationships with OEMs, we were able to arrange for spare parts to be sent to Antwerp immediately. An engineer of the stern tube seal manufacturer mobilized at the same time.

Because we have a very large stock of seal repair equipment stored in our fast response centers, everything needed for the replacement could be loaded on one of our dive support workboats as soon as the repair was confirmed. A team of diver/technicians then sailed to the tanker to start the operation.

By organizing everything from start to finish and in record time, the owner did not have to worry about making any arrangements for the repair. After the seals had been successfully replaced he could sail his vessel to her next stop without any unnecessary delay to the schedule.

Taking advantage of the Hydrex flexible mobdock technique the team was able to carry out the entire repair on-site and underwater. During the operation the team removed the three damaged seals and replaced them with new ones provided by the OEM.

Despite the remote location of the vessel, our technical department was able to arrange a rapid mobilization of a team and equipment to Australia. In the past we have carried out several important operations in Australia, among which an emergency stern tube seal repair on an offshore supply vessel in cooperation with Wärtsilä.

Every Hydrex office has a fast response center equipped with all the latest facilities, lightweight equipment and tools. This allows for a timely arrival of Hydrex teams on any location around the world with everything they need to successfully complete the job.

Damaged stern tube seals will cause an increasing amount of oil leaking or water ingress. By replacing the seals when the damage is first discovered, Hydrex keeps the down time low. The ship can keep its schedule as seal repairs can be performed during cargo operations.